The cryptocurrency market took a hit on Friday after the People’s Bank of China confirmed its continued crackdown in the space.

According to a Q&A on its website, the PBOC said that all crypto-related activities are illegal in China, including services like offering trading of digital assets, order matching, token issuance and derivatives. In addition, overseas crypto exchanges providing services in mainland China are also illegal, the PBOC said.

But it’s nothing new from China.

“This has to be the 20th time that China has banned bitcoin,” Meltem Demirors, chief strategy officer at CoinShares, tells CNBC Make It. “There’s always something ‘different’ about the bans, but this happens all the time and it’s never really dramatic in the larger scheme of things.”

And it would be quite difficult for any government to effectively ban bitcoin due to its design, James Ledbetter, editor of fintech newsletter FIN and a CNBC contributor, previously told CNBC Make It.

“I don’t think even a concerted effort among different countries and different central banks could actually shut down bitcoin,” Ledbetter said. “I don’t think that’s technologically possible. But there are ways that bitcoin could be regulated.”

So though each similar announcement from China causes an initial drop in the market, U.S. investors shouldn’t worry much – in fact, they should worry more about the potential fallout from U.S. regulation of cryptocurrency, experts in the space say.

Here’s what you need to know, according to crypto experts.

China has targeted bitcoin since 2013, forbidding financial institutions from handling bitcoin transactions, and over the years, has renewed its crackdown of the crypto market.

“It should surprise no one that China doesn’t like bitcoin. It is the pure antithesis of their regime of top-down centralized currency control,” Chris Bendiksen, head of research at CoinShares, says.

Just earlier this year, China announced more measures to shutdown crypto mining rigs, which process and verify crypto transactions, and reiterated its ban on Chinese financial institutions providing crypto-related services. It doubled down on forcing miners out, and the PBOC said it plans to step up monitoring of crypto-related transactions.

Now, in its latest ban on all cryptocurrency-related activities, China remains committed to its stance.

This time, the Chinese government is likely motivated by the development of its digital yuan and central bank digital currency, Demirors says.

China is also looking to fulfill its climate targets, aiming to become carbon neutral by 2060, and mining cryptocurrency like bitcoin is extremely energy-intensive, using a lot of computer power.

In turn, some crypto holders in China and Hong Kong are now scrambling to find a way to safeguard their assets, as CNBC reported.

Still, investors in the U.S. won’t be impacted much, if at all, experts say.

“You can only ban something once. Every ban after is an admission that you actually couldn’t ban it at all,” Demirors says.

Turn to CNBC TV for the latest stock market news and analysis. From market futures to live price updates CNBC is the leader in business news worldwide. 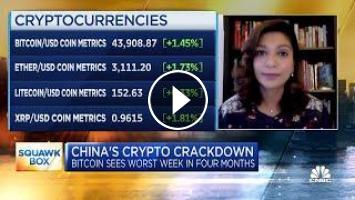